Using the WayBack Machine, let’s revisit one of my previously released books. Here’s a short excerpt from Book 2 of the MacNicol Clan Through Time series – A Time To Return.

Teressa stood near the front of the coffee shop counter, admiring her new scarf while she waited for the waitress to brew a fresh pot of coffee. She was running her fingers through the colorful fringe when she heard a group of men enter the shop. From the looks of them in their rubberized boots and heavy all-weather work jackets, she guessed them to be local fishermen. When they got closer, their collective odor confirmed it. She waved her hand in front of her nose.

One of the fishermen, the tallest of the bunch, was busy trying to get the counter girl’s attention, calling to her by name. “Hey, Zoey, make ’em hot and black, like always,” he shouted.

Not wanting to lose her place at the front of the line, Teressa took a step toward the serving counter. Apparently, the fisherman wanted to defy the laws of physics and attempted to occupy the same space as her, causing them to collide as they each stepped forward.

Teressa stared up at the man, who was easily over six feet tall. “Excuse me!” she said.

The large brute stared back at her, as if she were an apparition.

“Excuse me, I was in line here,” she tried again, moving to step around him. Unlike the others, he smelled of salt water and ocean breezes.

“What?” he asked, blinking.

“Where I come from, people are polite enough to say ‘excuse me’ when they’re rude enough to cut in line.” She stood her ground even though she had to tilt her head a bit to look him in the eye.

“Excuse me, miss. I didn’t see you standing there.” Spreading his arms wide, he bowed and stepped aside. He was still staring at her, but now he had a grin spreading from ear to ear.

“I’m glad you think this is funny.” Teressa was trying not to crack a smile, but his grin was devilishly infectious. She dropped her arms to her side, relaxing her stance. He continued to hold her gaze with his dark green eyes. They were kind, and he had a ready smile. Maybe she had judged him too harshly.

“I see ye’ve picked up a wee bit of our local color,” he said with a deep Scottish brogue.

It was her turn to stare blankly.

He reached out, touching the fringe of her newly purchased scarf. “A right fine choice.”

“Here, Robert. Take your coffee and move out of the way.” Zoey set a tall steaming cup of coffee on the counter.

“We’ve got a table over here,” one of his buddies called out to him.

He picked up his coffee and raised the cup to her in a parting salute. “Have a nice day, lass.” Still grinning, he turned away to join his friends. 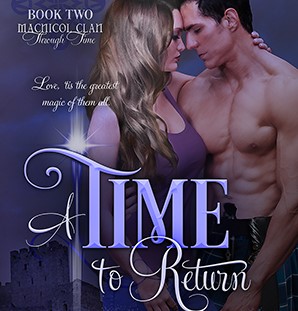 “Love, ‘tis the strongest magic of them all.” – Rory MacNicol