Sometimes I’m asked by I write about the Gilded Age of New York? Easy and short answer is because it interests me. My Jules Vanderzeit novels, including Until You Love Me, are all set in the Gilded Age. 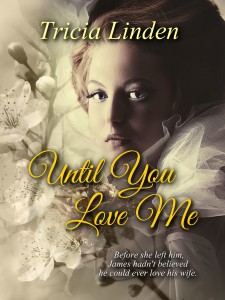 There are hundreds, perhaps thousands of romance novels set in the Regency and Victorian periods of England. I’ve read several. But after awhile, I wanted something different than an endless line of Dukes, Earls, Barons and other titles of the nobility. Then it occurred to me, why not America? The Gilded Age, the time period roughly from 1870s to early 1900s, is filled with stories of wealthy families living soap opera lives with scandalous escapades. Perfect fodder for romance novels.

It was the rise of the Robber Baron, Capitalist, and Industrialist. An enterprising young man could go from rags to riches within his lifetime, and pass that wealth on to his children, creating family dynasties. The Gilded Age gave us J.P. Morgan, Andrew Carnegie, the Astors, Rockefellers, Vanderbilts, and so many more.

But behind theses wealthy men were their wives and daughters, setting the stage for high-society with all their self-imposed rules of etiquette, and hierarchy. Caroline Astor, wife of William Backhouse Astor, Jr. proclaimed herself as the highest social arbiter of her time. She made it her priority to codify proper behavior, as well as determine who exactly was acceptable among New York’s elite, going so far as to list the 400 families who could be counted as members of Fashionable Society.

Much like the Regency and Victorian periods of England, the Gilded Age had its upstairs and downstairs, the in crowd and the outs (aka, all the others), new money vs old, or basically rich vs poor. It had fancy dresses, well dressed men and lots of money spent on balls, and parties and yachts and mansions. It was a time of amazing social change, as well as political and social-economic.

What’s not to love, and oh what fun to write about.